Father’s Day is coming up, and although it is not on the Church calendar, good luck trying to ignore it. To help you surprise Dad with the ultimate dinner and drinking party, we are combining several ideas from nearby feast days found in our Drinking With The Saints: The Sinner’s Guide to a Holy Happy Hour. If the father or husband in your life enjoys a strong beverage, he’ll be thrilled with this thoughtful and tasty menu instead of another necktie.

The Cocktail Before Dinner
“The Great Basil” is a DWTS original named after St Basil the Great, whose feast day is June 14/January 2. St. Basil was so tough that when an imperial agent threatened to rip out his liver if he didn’t cow tow to the Arian policies of the Emperor, the illness-ridden Basil coolly replied, “Good. My liver’s been giving me trouble for years.” When the astonished prefect, who was accustomed to Arian bootlickers, said that no one had ever talked to him like that before, Basil replied, “Perhaps you’ve never talked to a Christian bishop before.”

The Great Basil is inspired by Basil’s name as well as his diet of herbs and “vapid wine.” This refreshing drink is perfect on a hot summer’s day while keeping watch over a sizzling grill. 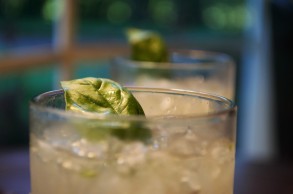 Depending on Dad’s tastes or your main course, you’ll want a beer or wine with dinner. For beer, try a trusty Harp Lager, which we recommend for the Feast of St. Ephrem the Syrian (feast day: June 18/June 9). St. Ephrem was a tremendously energetic deacon whose numerous hymns, poems, sermons, and biblical commentaries earned him the nickname “Harp of the Holy Spirit.”

For wine, think Bordeaux. Saint Paulinus of Nola (feast day: June 22) was a bishop in

southern Italy, but he hailed from Bordeaux, France, a region distinguished even in Roman times for its wines; and as a Roman nobleman, Paulinus most likely managed his own vineyards and wine presses on his estates in Aquitaine prior to his ordination. A red Bordeaux will also pair really nicely with whatever red meat you might be having.

Whatever you do, just make sure that you don’t drink and revel late into the night at someone’s grave and pour out libations in their memory: judging from his writings, St. Paulinus really disliked that.

An After-Dinner Drink
This year, Father’s Day falls on the feast of the twin brothers Gervasius and Protasius (June 19). These early martyrs are perhaps most famous for something that happened to them after their death, when the miraculous discovery of their bodies by St. Ambrose led to a stunning defeat of the Roman Empress Justina, an Arian heretic who had been trying to confiscate several of Ambrose’s churches. To celebrate the twins’ posthumous victory over the religiously insane Empress, try our semi-original Royal Nut Job. The “royal” is on account of the Crown Royal rye, the “nut” is for the Frangelico hazelnut liqueur, and the “job” is for the Irish, who usually need one. The drink is so delicious that you might even able to skip dessert.

1 oz. Frangelico
1 oz. Crown Royal
1 oz. Irish cream
Stir all ingredients in a shaker with ice and strain into an old-fashioned glass filled with ice.