How Do I Use the Drinking With the Saints Book?
Drinking With the Saints (DWTS) is organized into two parts by chronological order. The first part organizes the feasts of the Sanctoral Cycle (saints’ days) according to month, while the second part organizes the moveable seasons and feasts of the Temporal Cycle (like Lent and Easter) by starting with Advent and ending with the season after Pentecost.

To increase your chances of finding the right beverage for you and your guests, consult both parts. Or better yet, buy the Drinking With the Saints software app, which presents drinks/feast days from both parts at the same time.

Why Are There Sometimes Two Dates per Entry, With One Date in Parentheses?
The first date comes from the calendar of the 1962 Roman Missal of the Catholic Church, also called the “traditional calendar,” the calendar of the extraordinary form of the Roman Rite, and the calendar of the traditional Latin Mass. We follow this calendar for reasons outlined on page 436 of the book, but we also make plenty of exceptions, like including recently canonized saints such as Padre Pio, Damien of Molokai, Josemaria Escriva, Mother Ann Seton, and Pope John Paul II.

The second date, in parentheses, is the date of the saint’s feast day or holy day on the 1970 “new calendar” (aka the post-Vatican-II, reformed, or Novus Ordo calendar) WHEN IT IS DIFFERENT from the traditional date. If you don’t see a second date, go ahead and assume that the feast appears on both calendars at that time, even though strictly speaking, 70 saints were removed from the universal calendar in 1970 and this could be one of them. (The saint in question may, however, have been kept on a local diocesan calendar or in the Roman Martyrology.)

If you wish to go primarily by the new calendar, simply consult Appendix I on pages 436-444 for the appropriate dates and take it from there. Or better yet, buy the Drinking With the Saints software app, which gives you the choice, at the bottom of the screen, of organizing the drinks/feast days according to the traditional calendar or the new.

I Know that the Feast of Saint So-and-So is on Such-and-Such a Date, But He’s Not There. What Gives?
You probably have in mind the saint’s feast day in the new, 1970/2002 General Calendar. See the question above and follow its sage advice.

And If I Still Can’t Find a Saint?
Then the saint you are looking for may not be in the book. DWTS includes over 300 feast days and Sundays of the liturgical year. Not every saint listed on the universal Church calendar is in DWTS (which already weighs in at 486 pages!), and not every canonized saint and blessed (who number over 10,000) was able to be represented.

That said, if you cannot find a particular saint in DWTS, check this website or follow our posts and tweets. We hope to offer periodic supplements to the book, including new recipes and suggestions, including ideas from you, our friends and commentators. Like the Church calendar, we aspire to be a venerable and organically developing tradition!

What If I Am Looking for a Drink Instead?
No problem! Consult the Index of Beverages on pages 479-487. Do note, however, that the index mostly contains cocktail and liquor entries; the suggestions for wine and beer were simply too numerous to catalogue.

I Know Something About the Saints But Not Much About Preparing or Serving Drinks. What Do I Do?
We got you covered. First, there is a helpful Glossary of Alcohol-Related Terms on pages 445-449. Second, each entry contains instructions on how to make the suggested cocktail. And third, we will be posting in the coming weeks a series of helpful how-to videos.

I’m Not Catholic or Terribly Religious. Should I Buy This Book Anyway?
Yes, yes you should. The Drink is universal, and your objections to the Catholic Faith may start to melt after the second round. Or you may become an even ornerier opponent; but there’s only one way to find out.

How Do I Throw a Drinking With the Saints Party?
An excellent idea, that.
1. Start by picking a date and buying the materials you need for the suggested drink or drinks on that day.
2. Consult the Introduction on How to Mix and How to Toast on pages xiii-xx for further instruction and inspiration.
3. Stay tuned for our forthcoming series of how-to videos, which will show what barware to buy and how to make various drinks, muddles, etc.
4. Also stay tuned for DWTS cocktail napkins or other cool accessories to bedeck your holy happy hour in our forthcoming Gift Shop. 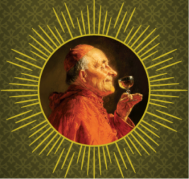 Who is That Person on the Cover?
The book’s front cover, designed by the seriously outstanding team at Regnery Press, features a smiling Cardinal about to sip a beverage. The painting was completed in 1895 by Eduard von Grützner—a painter known for depicting clerics enjoying, sometimes a little too much, their liquid refreshment—and is entitled Der Feinschmecker, which is German for “the Gourmet” or “the Foodie.” Since Von Grützner did not have a particular person in mind, we have taken to calling the subject “Cardinal Foodie,” and we hereby claim him as our official DWTS mascot. His Eminence doesn’t exactly look like a saint, but hey, we’re all a work in progress.
And yes, in keeping with the original title we’re calling him “Foodie” rather than “Drinkie” with the understanding that a Foodie is someone “who has an ardent or refined interest in food and alcoholic beverages.”

One interesting observation. The DWTS cover has the Cardinal facing right, tantalizingly towards the opening of the book, while in the original painting he is facing left.

Happy feast of St. Basil! Checkout the link in the bio tomorrow to find out how to make "The Great Basil" cocktail
Headless Horseman #DrinkingwithSaints