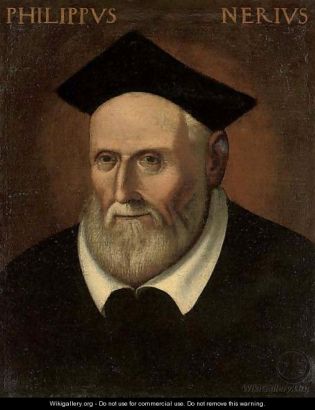 Today, May 26, is the feast of the adorable St. Philip Neri (1515-1595). Even as a boy Philip was so kind and lovable that he was nicknamed Pippo buono or “good little Phil.” As an adult, Philip would wander through the rough parts of Rome and ask, “Well, my brothers! When shall we begin to do good?” His disarming charm led to the conversion of the toughest thugs.

Philip had what the Italians call festività, an infectious joy and humor. The saint held that being cheerful “is the true way to advance in every virtue.” His long experience in directing souls, he said, had taught him “that in spiritual matters cheerful men were much more easy to guide than the melancholy.” Consequently, Philip preserved “perpetual cheerfulness” in himself and went to great lengths to encourage it in others. His room, where he received strangers as if they were his long-lost children at all hours of the day and night, became known as the “Shelter of Christian Mirth.”

Philip sometimes gave his penitents a playful slap on the cheek, saying “It is not you I am beating, but the devil!” Like a zany Italian uncle, he pulled their hair, caressed their faces, boxed their ears, and held their heads near his heart, all of which caused great joy and consolation. He also went to great lengths to appear foolish in the eyes of the world. Philip shaved off half his beard, wore goofy costumes, skipped along the streets as an old man, and once solemnly stroked the beard of a Swiss Guard. In the words of Blessed John Henry Newman, “If ever there was a saint who set his face against humbug, it was Saint Philip.”

Philip also had a burning love for God, literally. Once when he was praying a mystical ball of fire entered his mouth and lodged in his chest. Philip’s heart grew so aflame with divine fervor that he had to rip open his clothes and cool himself on the stone floor. When he rose, there was a painless swelling as large as a man’s fist next to his heart. An autopsy after the saint’s death would disclose the source of the protrusion. Over his heart, which had expanded with the love of God, two of Philip’s ribs were dislodged and curved in the form of an arch.

Tonight, in honor of this warm-hearted saint, have a Heart Warmer:

By a remarkable coincidence today is also Red Nose Day, a fundraising event sponsored by Comic Relief to end poverty in which people buy and wear a clownish red nose and the proceeds go to charity. How I wish could join in this charming tomfoolery (St. Philip would have loved it!) but alas, as several Catholic bishops have pointed out, some of those proceeds end up going to powerful organizations that support abortions worldwide. Sigh. It looks like I’ll have to find another way to make my nose red tonight.